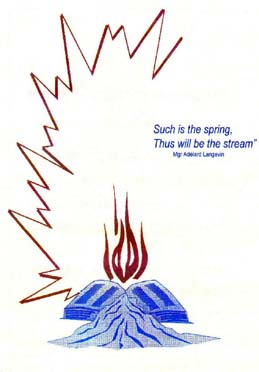 The phrase "As is the spring so is the stream," is for the Missionary Oblate Sisters an allegory that reflects the beginnings and growth of their foundation as a Congregation and their existence in the Canadian West. When Archbishop Langevin established the canonical noviciate of the Congregation on March 24th 1904, there were only six candidates. These young women became the first novices of the new Congregation. Within a few months their number was reduced to half as three chose to return home. Those remaining redoubled their prayers, clung to their faith and continued to hope in the future.

Their reward was not long in coming and soon, other women came to join them and the group grew to such an extent that by 1906 the Congregation was able to open a boarding school in St. Charles Parish. The Congregation continued to grow and by 1911 numbered forty members when the two first sisters made their final vows, a lifetime commitment, thus giving stability to the new foundation.

Archbishop Langevin wanted the sisters to be missionary-educators in every sense of the word. He once said, "Each child is a moral and social spring that will have influence in the future. You who are raising the children of the nation, you are also the spiritual source, therefore, take care, for 'as you make the spring, so will be the stream'…such is your vocation!" To the sisters he said, "As Missionary Oblates, you are preparing for the Church generations of faith," and for the world trustworthy citizens. (Constitutions 1906).

Today a very small number of sisters are active in apostolic life but they are sustained in their missionary work by the prayerful support of those who are retired or confined because of illness. Through their sufferings graciously offered, their prayers and oblation to God they too continue to live their call to be "Good News" to all.

What will happen to the stream of the Missionary Oblates in the future? What plans does God have for this modest stream which continues to decrease in strength and numbers? The answer to these questions is hidden in the will of God, but one thing is certain: The Missionary Oblate Sisters were founded in response to a need for missionary-educators and they have answered this call faithfully. Today they continue to live in faith and to be Good News to all! This is their legacy!